Voices
“Preaching is a means of grace. Through preaching, the Spirit moves to connect with the worshipers individually and corporately. It means any time you preach, there is the opportunity where the Spirit is working to convey justifying and sanctifying grace among the congregation and individuals. We just don't know how the Spirit will take up that word, and make it come alive in the lives of the people present.” 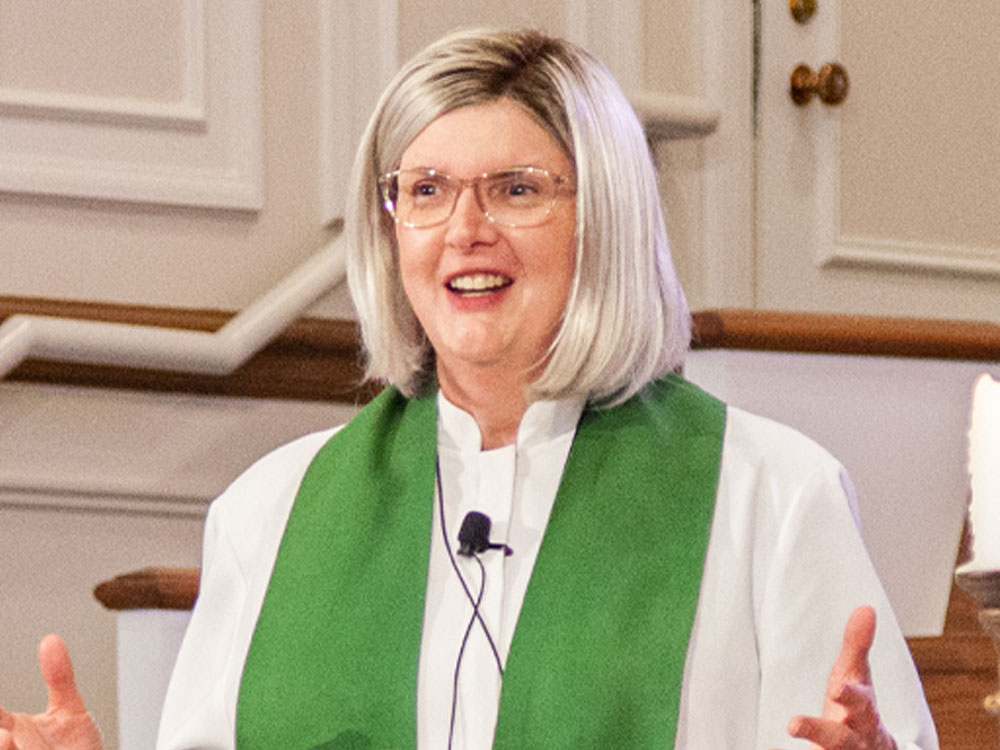 As an introverted and socially awkward college student, Dr. Stacy Minger was the last to think she would lead through pastoral ministry. But God spoke profoundly to her heart and others affirmed her calling by recognizing her gifts. After attending Asbury Seminary twice as a student, first for an M.Div. and later a D.Min., and pastoring for 11 years she returned to Asbury Seminary to teach biblical preaching to others.

“Preaching is a means of grace,” she said. “Through preaching, the Spirit moves to connect with the worshipers individually and corporately. It means any time you preach, there is the opportunity where the Spirit is working to convey justifying and sanctifying grace among the congregation and individuals. We just don’t know how the Spirit will take up that word, and make it come alive in the lives of the people present.”

As a student and early in her pastoral ministry, she had no female role models with similar theological beliefs. After graduating from the Seminary with an M.Div. the church she was assigned to made it clear that they didn’t want her because she was female. Six months into her two-point charge assignment at Girard and Ellis Corners UMC, the lay leader asked if he could say something to the congregation. She said yes, and he apologized to her in front of the entire congregation for undermining her leadership and place within their church community. Others jumped to their feet and started applauding.

“I love telling this story because it’s how God works,” she said. “And you know what won them over? It was because I preached biblically, and they had had such a long stretch without solid preaching. And while I was really green, I was preaching from the Bible, and that gave me credibility, and helped them say, ‘It doesn’t matter that she’s a woman.’”

After pastoring for five years, she returned to Asbury Seminary for a Doctor of Ministry degree in Preaching and Leading. During that time, Dr. J. Ellsworth Kalas, preaching professor and later president at Asbury Seminary, became her mentor. He embodied the character of a preacher with his humility, communicated from a heart of love, remained committed to scripture, and exemplified doing no harm to others.

“I think it was his pastoral heart that said, ‘I want to communicate in a way with such integrity that allows the Holy Spirit to flow through me, and then flow out to minister to others,’” she said. “Sometimes when I teach, I say things and I’m like ‘I’m channeling Ellsworth!’ I feel like I’ve received his legacy and made it my own, but I’m still passing on how Dr. Kalas has helped form me.”

Dr. Minger joined the Asbury Seminary faculty in 2004. Again, she was the last to expect this new direction. She and a friend returned to campus for Minister’s Conference. As they drove by the presidential mansion, the friend asked if she ever wanted to be a professor. Without a thought, Dr. Minger replied that she was going to be a pastor until she retired. The next day, one of her former professors approached her to ask if she was ready to come back to the Seminary to teach preaching. Stunned she replied with the pat Christian response that she would pray about it. At the end of that week, she applied, was invited for an interview, and offered the job.

“I think the longer that I’m a professor, the more I’m growing into being a pastor of pastors,” she said. “I think, maybe for the first 10 years, I’m just like, ‘Oh my gosh, what is it like to be a professor?’ And now, it feels like I’m integrating that identity more and more fully all the time.”

“In my own situation, I know that preaching was the anchor point in my pastoral ministry that opened up all kinds of doors, in terms of building relationships, leadership, and people being open to exploring what was happening in their own spiritual lives and seeking out places of connection with me because of their own real challenges and trials in life,” she said.

Now in her eighteenth year of teaching at the Seminary, she never tires of teaching preaching. Each semester begins with a sense of wonder and joy at what God is going to do this semester. As she teaches classes in all formats—hybrid, in person and online—she teaches from a pastoral perspective. Dr. Minger meets with each hybrid and online student individually at the beginning of each semester over Zoom to get to know them and then offers individual critiques for sermon assignments.

“I want to get to know them. I don’t want them to just be out there as generic people in my mind, I want to have a relationship with them,” she said. “Getting a grade for a sermon is not like getting a grade for a paper. Sermons come from your soul. It’s embodied in you. And so receiving feedback on preaching, can be hard, but these Zoom calls with students have made all the difference in the world for me. I feel like I’m much more in a pastoral position again.”