Voices
“Providing our community with a safe place for fellowship, and meeting their educational needs through tutoring and mentoring.” 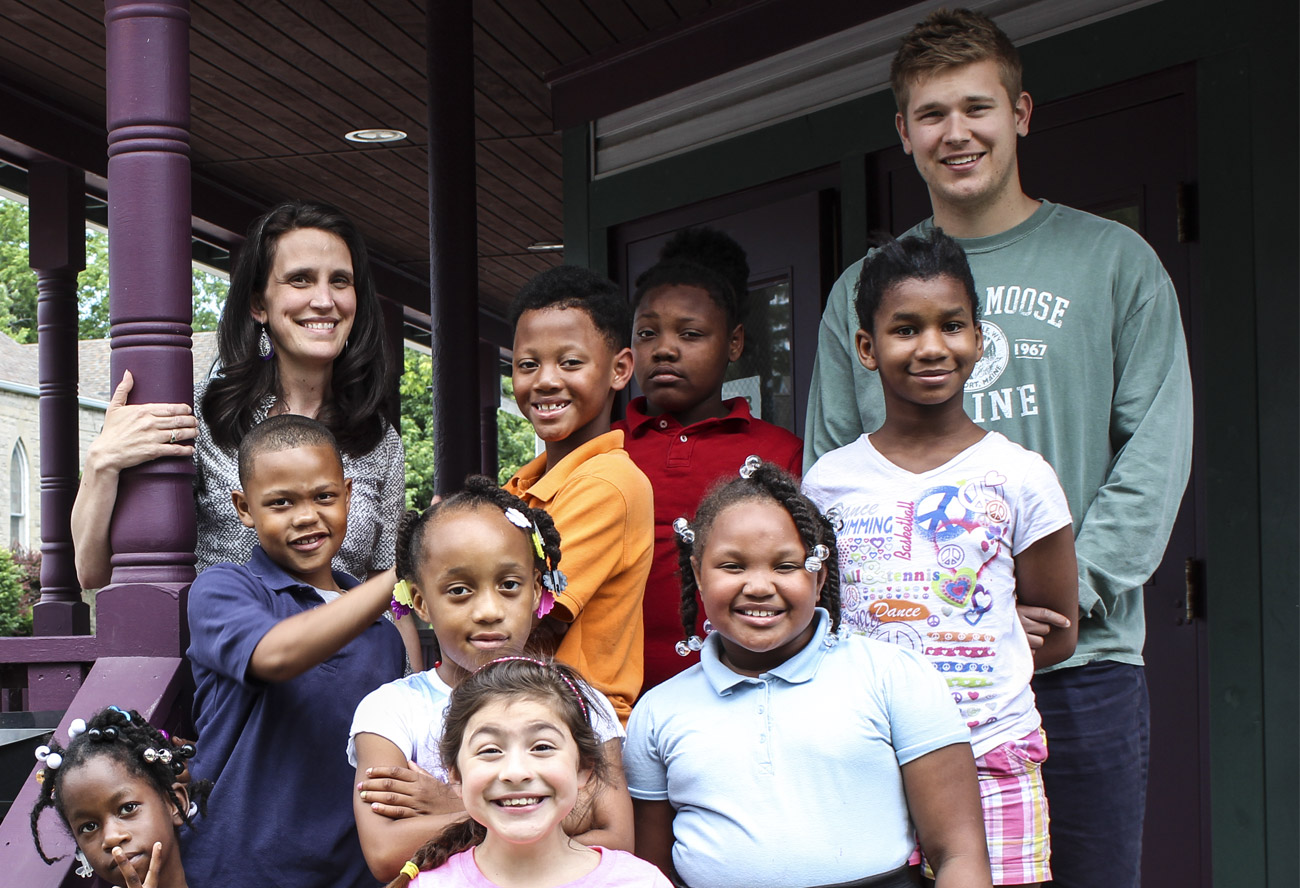 On the near east side of Indianapolis, just west of Brookside Park, sits First Free Methodist Church, a small, but beautiful building that has served the neighborhood as long as it has stood. Across the street from this church is a building that many years ago served as the neighborhood grocery store. The store was forced to close in the early 1990s, and the house sat in a state of disrepair for several years. After a time, people heard that the house had a potential buyer. It was thought that perhaps someone could move in and clean it up, or even open up a new business. However, they soon learned the sad truth: the Outlaws, one of America’s oldest renegade motorcycle gangs, was looking to purchase a new clubhouse for their Indianapolis chapter, and their sights were set on this building. This gang has notoriously been involved in all sorts of criminal activity for much of its existence, truly living up to its name.

So when Don Meyer, then the pastor of First Free Methodist Church, heard who his new neighbors would be, he knew that something must be done. After collecting as much money as the church could, they outbid the Outlaws, forcing them to find a new home in Indianapolis. Pastor Meyer’s fears were vindicated later in 2012 when federal investigators conducted numerous coordinated raids in Indianapolis, arresting every member of the Outlaws in the city, and charging them with using violence to collect on debts, insurance fraud schemes, illegal gambling, and trafficking numerous illicit drugs including cocaine and prescription painkillers. And so, through the work of the church’s congregation, this criminal menace was kept out of the neighborhood.

It took many years before the church was able to start working on the building, but they eventually received a small grant to fix the outside. As they were finishing up these renovations, the congregation reached a crossroads. The neighborhood had slowly been deteriorating, and the church with it, and soon enough, they were unable to hold onto the property. They decided to sell it in 1997 to a board of directors in the Indianapolis area, made up mostly of Free Methodist pastors and influential members. Though they wished to establish a ministry for the neighborhood in the building, they lacked the funding and resources to do so for many years, causing many to doubt that their goal could ever be realized. But the president and founder of the board, Chuck Ellis, would not let go of their dream. When many others maintained that there was no point to what they were doing and that the best option was just to sell, he refused to give up on it. Finally, ten years later in 2007, the board was able to develop the building into a non-profit and create a mission statement and by-laws, officially establishing LYN (Love Your Neighbor) House. Soon, they received a $7,000 donation from the Wabash Conference, a collection of Free Methodist Churches throughout the Midwest. This revitalized the struggling ministry and prompted the board to hire its first employee in 2009. That employee was Heidi Lyda.

Heidi graduated from Asbury Seminary in 2008 with a degree in World Missions and Evangelism. “When I graduated,” Heidi says, “I knew I had a heart for community, racial reconciliation, and people living in poverty.” Though her degree was in world missions, she says she felt called to stay in the United States. After seeing a post on the Asbury website for an summer internship in inner city Indianapolis, she felt that it would be the perfect fit. However, when she arrived, she realized just how much of a challenge she had taken upon herself. She lived upstairs in the house in a small apartment, so small that the kitchen was a refashioned tiny closet. “When I started,” she explains, “the apartment was finished, we had carpet upstairs, no carpet downstairs, no operating ministries, $7000 a month budget, and no regular donors.” Though the task was especially daunting, and, as Heidi maintains, she truly had no idea what she was doing, she quickly managed to turn things around.

She lived in the apartment in the house for three and a half years, firmly establishing her role in the community, which was especially receptive to her. This was crucial, she says, because “being a member of that community…is essential to what we do. 90% of my job happens just because I live in the community.” As a result, Heidi was able to put the mission of LYN House into action. The mission, as she describes it, is “to demonstrate Christ’s love through compassion, hospitality, and transformational care.” The house is meant to serve as a safe haven for the residents of the community, helping them to meet their educational, physical, and spiritual needs. Heidi has poured the last six years of her life into this endeavor, making LYN House what it is today.

There are many ministries now that LYN House participates in and has started itself. Among these is the one-on-one tutoring program for children in the neighborhood. This has the ultimate goal of preparing children for their educational futures and, if possible, for becoming tutors themselves. Then, Heidi says, “during the summer and school break we have what’s called the ‘express yourself’ camp, centered mostly around the arts. So this summer we’re doing photography, art, cooking, and then VBS.”

A new summer program that is under way is a leadership workshop. Heidi explains that when children have been with LYN House for some time, they sometimes feel the urge to leave, to do something better with their time. Heidi sees this program as a solution to that problem. During this workshop, attended mostly by 13 and 14 year olds, the children learn “what it means to be a leader, how to work with kids,” and what the expectations are of being a leader. When the workshop concludes, the children are to become Junior Leaders for the remainder of the summer, leading younger kids from kindergarten through sixth grade. This gives them a chance to become actively invested in the ministry and to feel that they are integral to what is happening.

Other programs that LYN House is involved in include a monthly community breakfast open to all. For adults and older students, LYN House has sought to help with job training for the unemployed through the national ministry Jobs for Life. This training includes lessons on drafting a resume, going over basic job skills, and helping apply for jobs. One incredible ministry that LYN House is a part of through First Free Methodist Church takes place on Thanksgiving. Throughout the weeks leading up to Thanksgiving, LYN House and the church, as well as numerous other churches throughout the city, have food drives to collect as much food as possible. This food is then prepared for Thanksgiving Day. On that day, volunteers take time out of their days to go throughout the neighborhood delivering Thanksgiving dinner to hundreds of families in need. This ministry is a perfect example of LYN House and First Free Methodist working together to meet the needs of the poor in their community.

While Heidi serves as the director of LYN House, she receives a tremendous amount of help from volunteers. She explains, “Some are from the church in the neighborhood, some are other Free Methodist individuals, or from Redeemer [Presbyterian],” or other partnering and supporting churches around the city. Many learn of LYN House and how they can help simply through word of mouth. All told, LYN House now has dozens of volunteers every year helping them to achieve their goal of serving the community. These volunteers and their churches donate not only their time, but also their money. Much of LYN House’s budget comes from individual donors and church donations, but Heidi says that they hope to soon extend their financial base to include grants from local businesses, which would be a tremendous help.

Having lived in the neighborhood now for six years, Heidi cannot imagine being anywhere else. “Why would you not live on the near east side? It’s the coolest neighborhood in the city!” When asked why she does it, why she has given every ounce of energy she has to LYN House, Heidi says, “I do this really out of my obedience to God and Christ. I know that he has called me here to do this and to be here, and out of the love that I have felt from God and what he’s done for me, I feel like I have no choice but to do this.” Her faith has kept her strong through the hard times, and given her immense joy in the good times. Through LYN House, she has truly embodied the radical hospitality and compassion of Christ, living alongside those she hopes to help and devoting her life to their physical and spiritual needs.